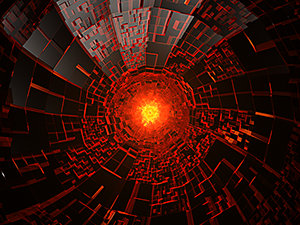 The Universe That Doesn't Believe

The Reconnections have spoken to me many times about the process of fragmentation that occurs---beginning with the most expanded vibration (The Gathering of the One)---and decelerating, incrementally, into variations of reality that explore Separation and Limitation in all its possible/probable formats.

The specific fragmentation process that began with Jesus' promise (of a lifetime).........is simply one chip off a huge experiential iceberg. However, it is a significant chip!  Therefore, the Guides have drawn it to our attention.

We read the words of Jesus' promise today, inhabiting a universe that contains historical records to verify that many (if not all) of the people who heard Jesus speak at the tomb of Lazarus later tasted of physical death. In fact, we also inhabit a universe wherein Jesus, Himself, tasted of physical death---although He was said to have demonstrated a victory over it, by raising Himself up after three days.

In this current universe, we have cemeteries, mausoleums, and a life expectancy of some 70 to 75 years.  Many of you reading this post have laid loved ones to rest, amid tears and sorrow, and some of you may even be waiting (albeit helplessly, and even anxiously) for the imminent passing of someone near and dear to you.  I have been there, several times, and it is no laughing matter.

I surely realize the profound emotional significance of the subject about which I am now speaking. Humankind is on the brink of an enormous shock. When the Guides speak to us about these matters, they do not do it lightly, nor with any sense of shaming or derision.  We are where we are for a purpose, and we are multidimensional.  We exist in many places, simultaneously and in full array.  This universe is simply one of them---no more or less real than any other context which we now inhabit.

We are the children (the soul fragments, really) of THE UNIVERSE THAT DOESN'T BELIEVE.  We live where we live, grappling with the demons we face, because we chose NOT to believe a simple promise that was spoken in the noonday sun, by a man who knew just a little more about life and reality than we did.

In truth, Jesus' statement is one of MANY SUCH LIBERATING STATEMENTS---spoken by Avatars down through history---that, if believed, would become the required "happy thought" that our friend Peter Pan promised would make it possible for us to rise and fly.

Remember the movie "Hook?"  Remember how Peter Pan needed to remember his "happy thought" to become the warrior he once was?  Well folks.........this Promise of a Lifetime is one of those happy thoughts.

We are eternal.  Death is an illusion.  Sickness, poverty, famine, war, hatred, persecution, and all the SHIT that foreshadows it, and goes along with it, are manifestations of UNBELIEF.........in that one, simple promise of a lifetime.

Those who have studied Jesus' teachings, in the light of the ENTIRE SCRIPTURAL ACCOUNT, rather than merely using the "accepted" texts that were "blessed" by the Council of Nicea, have come to believe that Jesus did not merely come here to show people how to "follow Him." That is an incredibly limited and constricted view of His purpose (although it does have universes acceptable, if that is what we want).

A more expanded view of Jesus' life and teachings suggests that He came to show us how to EXPAND OURSELVES.........using an incredible energy and spiritual power that comes from Reconnection to All That Is.  He set an example, but did not mean to lock us into a pattern.

He said:  "The things I do you will do also---and GREATER THINGS because I go to my Father."

Alas, it is often true that vibrant relationship often turns to religion---realizations become rituals---and moment-by-moment, organic spiritual guidance turns into dogma and a set of rules.  And the stronger (those who arrived there first) will sometimes bend and shape the core of the knowledge (gnosis) into whatever form that will contain and control the weaker (less informed) members of society.

The word OCCULT means HIDDEN.........and all those who have studied the deeper things of Spirit are Occultists.......and it has nothing to do with Satan (unless you wish it to........as he is also part of All That Is).  It has to do with that which is HIDDEN and UNSEEN.......and previously UNKNOWN to us..........which we have hidden from ourselves because we weren't ready to BELIEVE.........

And it is ALL PERFECT, don't you see?  Those distortionists of the truth are also fragments of THE ONESELF, WE........all those Preachers, Popes, Judges, Pharisees, and Dark Governments.......

Each part is a living aspect of THE ONESELF.........serving its purpose, laying out a path for humankind to explore.  The Controllers call themselves ILLUMINATI  (lit. "The Enlightened Ones")And RELIGION has been shaped and perpetuated to be the "opiate of the masses."

And now..........when spiritualism is once again on the rise, and "PROJECT DISCLOSURE" Information has been spread across our country, begging Congress for a hearing about those "many things" they have been "hiding" from us...........

What will we do with that?

You see........the real "problem" with REVEALING THE TRUTH about what has been going on---with religion, with the ETs, with Government, etc---is the fact that the REAL TRUTH expands out into infinity, and takes an incalculable number of forms!

But folks...........only WE, OURSELVES can say what that is.  We are the CREATORS of our reality!  No amount of Government Disclosure is going to change that.

Only by going inside, and trusting what we find in there, can we discover the TRUE INTERPRETATION that will work for us.  And that interpretation may be different and unique for every single person.  So what????  So be it!

The real nature of DEATH is the silencing of a voice, and the burying of a figure that portrays and embodies a unique and powerful version of God/Goddess---of the TRUTH AS HE SEES IT and as he also BE'S IT.

And it is ILLUSION.  There is no death.  There is only the APPEARANCE of it, within a veiled reality base called "The Universe That Doesn't Believe."  And it seems so REAL here, doesn't it?  And it has historical documentation, and scientific proof, and physical manifestation, doesn't it?

Of course it does!  ALL universes, within the Multiverse, have historical, scientific, and physical documentation for the BASIC BELIEFS they embody.  That's part of the gift of CREATION, folks.  Do you believe in HELL?  Good!  It exists.  It exists FOR YOU.........as if you were the only person in the movie theater.  The afternoon matinee would STILL BE SHOWN........because you ordered it, through your belief.  That's how powerful you are.

Immediately, I can hear some of you saying:  "Wait a minute,
Daniel.......wait a minute Reconnections......!!!  Do you mean to tell me that I, personally, KILLED my mother, my father, my brother who died?  Is that what you're trying to tell me?"

During His own life process, Jesus said:  "No man takes my life from me.  I lay it down of my own accord."   This is also true of every person who chooses to live and die in any perceptual universe.  Those who die, die to illustrate a point, to give us a message.   Jesus died so that we (who believe in death) could meet Him and hear His message. He came ALL THIS WAY to catch our attention---not just as a sacrifice for sins (that's a bunch of religion stuff again). He came here and did what He did as an ILLUSTRATION of the fact that those who Create the illusion can also come and PLAY in the illusion.

And even now.......this very moment........the images of our parents, grandparents, daughters, sons, stillborn infants, aborted fetuses, world leaders, and EVEN MORE EXPANDED VERSIONS OF OURSELVES stand by........watching us go through this..........the Reconnection to Onenesss.

I'd like to end this message with the words of one of the earlier transmissions from the Guides, that has blessed my life time and again.  It goes like this:

"Until now, you have played all of the roles well. There has been total immersion in Your Game as the necessary experiences and unfoldments moved you ever closer to the time when that which was hidden would be allowed to come to light. THE TIME OF RECONNECTION. As we continue to supply the "missing links" between the Greater Self and the smaller version of that Idea, with which you have always identified, a wonderful Transformation will begin. At your own rate and in your own timing, the lines that border your reality will begin to fade.

Within the face of every person and imprinted upon every object within your field of awareness, you will begin to see the common fabric out of which ALL STORIES AND SCENARIOS are cut.

Though they appear expensive and expansive---those story boards and props which have been called "Reality" will eventually collapse to reveal the real Source of all the noise and commotion. But this "Oz" behind the curtain is anything but a useless "little Old Man." Instead there will be seen a grand and glorious Being of such magnitude that it would be futile to seek to portray that picture here. You will meet Your Expanded Self. And with the laughter of a child there will be the final appreciation of the humor and grace out of which EVERYTHING IS FORMED. And then you will be HOME."

I love you all.

Copyright, 1993, by Daniel Jacob.  All Rights Reserved.  May be copied and shared, for purposes of personal growth and/or research, so long as the above URL and this copyright are included.  All reproduction for profit, by any means, requires the written permission of Reconnections, Inc.