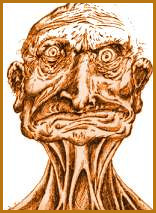 "I feel like my body has gotten totally out of shape, so I got my doctor's permission to join a fitness club and start exercising. I decided to take an aerobics class for seniors. I bent, twisted, gyrated, jumped up and down, and perspired for an hour. But, by the time I got my leotards on, the class was over."


--- Reporters interviewing a 104-year-old woman: "And what do you think is the best thing about being 104?" the reporter asked. She simply replied, "No peer pressure."

--- The nice thing about being senile is you can hide your own Easter eggs.

--- Just before the funeral services, the undertaker came up to the very elderly widow and asked, "How old was your husband?" "98," she replied. "Two years older than me." "So you're 96," the undertaker commented. She responded, "Hardly worth going home, is it?

--- I've sure gotten old.! I've had two bypass surgeries, a hip replacement, new knees. Fought prostate cancer and diabetes. I'm half  blind, can't hear anything quieter than a jet engine, take 40 different medications that make me dizzy, winded, and subject to blackouts. Have bouts with dementia. Have poor circulation; hardly feel my hands and feet anymore. Can't remember if I'm 85 or 92. Have lost all my friends. But, thank God, I still have my driver's license

--- An elderly woman decided to prepare her will and told her preacher she had two final requests. First, she wanted to be cremated, and second, she wanted her ashes scattered over Wal-Mart. "Wal-Mart?" the preacher exclaimed. "Why Wal-Mart?" "Then I'll be sure my daughters visit me twice a week."

--- Know how to prevent sagging? Just eat till the wrinkles fill out.
---I'm getting into swing dancing. Not on purpose. Some parts of my body are just prone to swinging.

---These days about half the stuff in my shopping cart says, "For fast relief."


- --THE SENILITY PRAYER : Grant me the senility to forget the people I never liked anyway, the good fortune to run into the ones I do, and the eyesight to tell the difference.