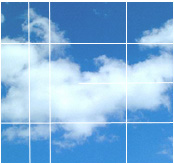 I was speaking on the phone to my friend Antron, who lives now in the Four Corners area of the U.S.  He is what you might call a "Galactic Shaman," and has been on the road for about 14 years, traveling in an R.V. (rig) which he has personally adapted himself into what truly resembles a "space capsule."  He calls it "Taj"......which is short for "Taj Mahal."  But I truly think of it now as an actual extension of his body.  My friend has perfected a minimalist lifestyle, and seems to be able to exist on next to nothing, if he so desires.

In any event, Antron was sharing with me about the skylight that he built (long ago) directly over his bed.  It has a plastic pyramid upon it, that can be flipped upward, like the upper door of a tank, so that he can stick his head up and look out the top of the rig.  Apparently, the skylight under his pyramid had deteriorated somewhat, and it let too much light in for sleeping.  Rather than spend the money to replace it, Antron decided to paint a scene over it (he is also an artist of sorts)........so that the sunlight would be blocked.  It can be opened, if need be.......and the pyramid still flips up........so the painting is both functional, and practical as well.

As he was telling me this story, I could sense my friend's deep satisfaction with the image that he managed to paint on the skylight.  And I smiled with him as I heard it, even while the Reconnections inwardly nudged me (as they frequently do) and whispered something amazing in my ear.  They said:

"Your friend is illustrating something quite profound.  There is no more sky, you know.  It is all a perceptual construct, like the interactive reality base that was spoken about in "The Matrix" movies.  In essence, each of you is painting his own 'scene' on the roof of his universe.  You are making it all up now--even more than you know!

As you slowly let in more and more knowledge of the Multiverse, you have begun to flip open the "ceiling" of your perceptions and your imagination.  To keep from being scorched by the influx of knowledge and possibility  that are also there, each of you has created your own personal "holodeck" to slowly ease out of the limited and defined "story" you have told yourself about the universe......as you free yourself from the "shell" of your beliefs about the world.  Some people do it more rapidly than others.  But you are each doing it.  And you are having a wonderful time!"

When I shared these insights with Antron, I could feel him expand, inwardly, to integrate this insight.  He said that he knew this, on some level, but hadn't really applied it to this situation with the R.V.   The whole sequence of realizations that passed between he and I, in that moment, was a great example of how Multiversal Knowledge moves from the mental body into the emotional body.  In a sense, we were both using "Taj" as a tool for "grounding" Multiversal Knowledge into our lives and personal universes.

As I share this, I am reminded of something that came through me in the article "The World is My Desktop."  In that article, I wrote:

"Once upon a time, humanity thought the Earth was flat.  If you tried to explain it differently, people just shook their heads at you and said you were crazy.   Then, Columbus sailed to find a "New World" for himself.   He bought a ticket on a different train than the one preferred by his contemporaries, and he set out  down a very different track!   Centuries later...... we all are here, living on the (circular) planet that he discovered.  Meanwhile, back in those other universes...........Planet Earth may have manifested itself in quite a different way.

Presently........... much of humanity thinks of the Earth as a single, objective, unchangeable, "mass reality."   We all live upon it (i.e. we share it), and where that one Earth goes, everyone must ride along.

Spirit now establishes for us that such a concept is every bit as archaic and limited as when we believed that the Earth is flat.  They say that, in the Oneself, there are "many Earths"............in fact, there is an infinity of them!   And each sovereign creator, of each universal reality, gets to choose which Earth he or she is going to inhabit."

Are we living in "The Matrix," or have we yet been awakened?  If the latter, we may find that may of our perceptual "muscles" have atrophied, due to lack of use.  Our spiritual "eyes" may be sensitive to light, because we have never used them before.  Now is a time of great pain and adaptation on the planet.  And, even as Neo had to have his time of adaptation, when he was first awakened in "The Matrix," we also must give ourselves time to rest and assimilate all the energy that is coming into our awareness.  Remember what Morpheus says to Neo during this process?

Oh, my.........Chicken Little!  Your message is out of date.  The sky isn't falling at all.  It has already fallen.  But look!  Look at the Onederful painting you have put up, to take its place!

Copyright, 2003, by Daniel Jacob.  All Rights Reserved.  May be copied and shared, for purposes of personal growth and/or research.  All reproduction for profit, by any means, requires the written permission of Reconnections, Inc.

HOME | WHO, OR WHAT IS BLOCKING THE SUN?