Years ago, my first teacher of Metaphysics told us:  "The real sign that the Age of Aquarius has begun will not be when women find their masculine side.  Rather, it will be when men begin to identify and honor their inner feminine."

Although gender characteristics do play a role in this process, it must be pointed out that each gender carries both masculine and feminine energies.  At our core, we are androgynous.  We begin that way in life (as infants), and we return to that state (somewhat) as we grow older.  Of course, it must also be said that timing for those transitions does vary from person to person.

Meanwhile, during that active and creative period between infancy and old age---societal roles and gender assignments seem to color everything we do.  Our last 2000 years of human history have been dominated by a Hyper-Masculine Extreme......what I like to call "A man in a Can."

The Reconnections once told me:  "There is a difference between Tough and Strong.  "Tough" means you have armor on, and cannot feel.  "Strong" means that you're available to be touched, and are willing to deal with the manifold sensations that go along with letting others come into close proximity with your tender parts."  Now is a time of great unraveling for various systems of "established order" that have dominated human history for hundreds of years.  In many ways, we refer to these systems as "feud-alistic," since their establishment and demise is usually accompanied by a great deal fighting. 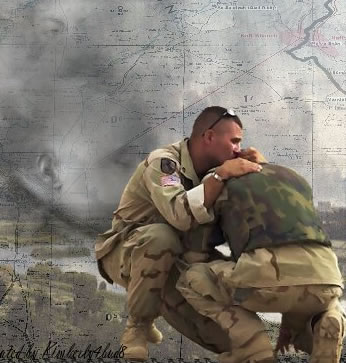 Fighting is something we know, something humanity has learned to do well.  What we haven't yet learned---especially our warriors and kings---is how to really FEEL into things.  Still steeped in Separation Mindset, we look upon our fellow humans as something "out there"........a "force" to be reckoned with and controlled, rather than simple reflections of energy dynamics that are playing out inside each of us.

"If we have no peace, it's because we've forgotten that we belong to each other.

When I was a young boy, I would occasionally cry in the presence of my parents.  Though my Dad was generally a patient man, he was also a product of post-depression era thinking.  On more than one occasion, he would turn to me in my grief or frustration and yell:  "Stop that crying or I'm going to give you something to really cry about!"

In my article "War or Anti-War," written just before the Iraq Conflict in 2003, I suggested that the real source of TERRORISM in the world is a gathering feeling, inside each of us, that ENORMOUS CHANGE is about to come to our planet.........change we cannot stop, cannot understand, and dare not fully consider. I went on to suggest that unreasoning, vicious wars can be used as coping mechanisms for Planetary Hyper-Males, when they get confused or feel helpless in the presence of Nature's awesome power.

There are times when we fight just to give ourselves something to cry about.  One woman suggested:  "War is an expression of man's menstruation envy."  An adept Psychologist once pointed out:  "Most women cry when they need to rage........and most men rage when they need to cry."