STAR KIDS IN THE MOVIES

I was particularly struck by the many important tones that were infused into the Mass Consciousness through this powerful mini-series "Taken" by Steven Spielberg.  Originally released in 2002, it is now out on DVD, in five separate segments.  When watching them, I suggest that you either watch one segment per day, or one package disk (2 segments) per week--giving yourself plenty of time to process the material.

The Reconnections refer to movies, magazines, TV, and other popular mediums as "The Dreams of the Mass Mind."  They consider these offerings to be absolutely honest, precise, and credible indicators of the direction the mind of humanity is taking, during any particular period in history.  Their reasoning for this centers around the power and clarity that comes from pure desire for financial gain and security.  A producer and director must have commercial success in order to keep making films.  Therefore, a considerable amount of time and research goes into pondering exactly what the bulk of humanity will be able to understand and integrate, and the precise timing that is needed for a film to enjoy maximum exposure and receptivity.

Symbolically, the release date of a film is more important than the making of it.  That is because the film's release is correspondent to the actuality of having a dream in human experience.  We often process our emotions in these ways when change in our lives is at its peak.  This is true even though the symbols that make up a dream that may have been forming for several years.   During these turbulent times--as the world faces growing economic upheaval  ( as well as contemplating war in the Middle East), the possibility of yet another "enemy" rears its head in our collective imagination.

It has been a major premise of Science Fiction writers, over these last several decades, that the only thing that will keep humanity from destroying ourselves will be intervention or attack by life forms from other planets or galaxies.  This is a powerful theme that has been explored in such classic Sci-Fi films as "The Day the Earth Stood Still," and "Independence Day."

Some say that our "Space Brothers" will come to assist us, while others say that the appearance of UFOs (in an open and obvious way) is a huge threat, and will stimulate humankind to start pulling together instead of seeking to blow ourselves apart.  However the theme is explored, it seems very definitive that the appearance of Extraterrestrials  (even if only via this series) is a powerful activation, which can have a huge effect on the inner being.

Here is just a basic list of the themes and tones that are being introduced or expanded upon in this show:

With the appearance of Allie, the Wunderkind, into the show---Spielberg is using his influence and talent to properly introduce Star Children to the world.   Her openness, her confidence, her "take" on life in physical form is very much similar to the way a wide-open, fully functional Star Kid functions.  It makes me smile, to be present at the "birth" of awareness about these kids into the mass mind.  Of course, this is only one small introduction.  Many folks are too busy, or too tired, or too "this" or "that" to appreciate what is happening.  But this is truly a great beginning.

As the series concludes, we see a split happen in Allie's mind and desires.  On one side of her, she is a little girl--a human, with feelings and needs.  She wants to play with her friends, stay with her Mom and Dad, and live her 3D Life the way "normal people" do.  On the other hand, she embodies the presence of powers and abilities that surpass our wildest notions.  Being "discovered" by the government, and eventually by the people as well--Allie realizes that she can kiss her "normal" life goodbye.  It's a real conundrum, and it is this fundamental split which is a central factor for why the ascension is taking so long at this time.  We don't know if we want to "go," or if we want to stay and continue on as we are!  Do we want to complete our transformation, allow ourselves to remember............to become "more than we are".............. or do we want to resist, and stick with the comfortable, status quo?

In the last hour of the series, Allie's (Alien) Grandfather decides to leave the decision about "if," "how," or "when" she will ascend to Allie.  He ceases his efforts to control the situation, gives her a chance to "escape," and he walks off into the clouds in suitable Christ-like form.  He tells her:  "I'm very glad I got to see you.  Goodbye, Allie."  Then, he adds:

Soon, Star Children will begin coming to themselves, in droves...........remembering.........and we will be dealing with Wunderkind of our own.  When this happens, many of the fears and hesitacies I have been hearing about these Star Kids will simply fall away.  We will want to worship them, canonize them, or maybe even demonize them!  After all, humans respond to stress and change in many different ways.  When this happens, perhaps it will benefit our kids to remind their parents and teachers to do what Allie's Grandfather says:

"Look inside YOURSELVES to see the part of YOU that is US."

Isn't this the real message that Jesus, Buddha, Mohammed, and all Avatars bring to us at this powerful time?   We are involved in an incredible merge to Oneness.  We are beginning to  own it all,  as Self..........the good, the bad, the ugly, the beautiful............all of it.  And we need to get ready.........to become more than we ever thought we could be.  And this is our time to wait. Not as individuals, but as a whole human race.   The is our time of  WAITING TO BE READY. 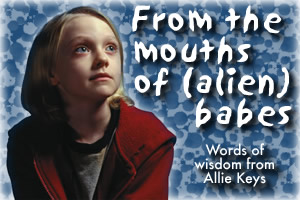