THE "EYE" OF A STORM 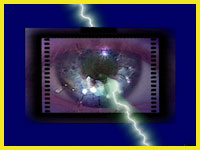 I received the following account in e-mail.  It is a personal letter that was written by a fellow in Virginia, who lived through Hurricane Isabel on the East Coast of the United States.

Well, this has not been fun but it has been educational.  We've seen the best and worst of human nature the past 5 days.

Remember the gas lines of the early '70s?  They were back for two days after the hurricane came through.  I saw an old fashioned street fight over gas.  Fortunately, we had gassed up our vehicles the night before the storm and we're glad we did.  We're learning new detours all over the cities because there is no straight line to anywhere now with all the trees and downed power lines blocking the roads.  One of our tunnels between Norfolk and Portsmouth flooded and remains flooded today.

Everything was and is in short supply:  ice, clean water, electrical power, hot meals, cold meals, batteries, flashlights...and patience.  But for the most part, people are pitching in wherever and whenever needed.  We just got power back last night, so it was 4 1/2 days without power for us, but a whole lot of people are still in the dark and may be for up to...well, nobody really knows for sure but maybe another 10 days at least.

Right after the storm there were 1.8 million customers without power; a "customer" is an electrical meter, so figure the number of people to be around 2.5 million conservatively.

Some people used generators to keep things running and everyone has been told multiple times not to rig it up to breaker boxes because it can hurt electricians working to help us. Unfortunately, some people just don't care, I guess, and an electrician from a Texas power crew that came to help out was killed in our neighborhood by some thoughtless person that felt the rules didn't apply to him/her.  The hunt is on for that person, and we hope the person is brought up on charges (of the legal variety) when found.

Still, when we drove up last night after working another day of clearing away debris from our property and our rental properties, our now electrically functioning neighborhood looked like it was lit up for Christmas, a truly beautiful site; the street behind us remains in the dark.

We were fortunate in that we always had running water, and we decided that if we could have one utility we'd rather have it be water.  At least we can be clean.  A cold shower after a long day of hard labor and then falling into bed with cool winds blowing through the windows allowed us to sleep like rocks for a few hours, until the drone of the generators woke up about 3 in the morning and then it's just catnaps the rest of the night.

The weather during the past several days has been picture perfect, which has certainly aided in the clean-up effort.  Schools have been closed since Wednesday noon and some will reopen for the first time tomorrow, maybe.

Bea is scheduled tentatively to return to work tomorrow, but that's still not a certainty because some schools have power and some don't, and the districts are trying to decide on how to address that.

Well, gotta go.  Time to grab a shower and get back at it, a hot one this time in a lighted room followed by a shave with hot water.  I certainly hope I never take these luxuries for granted again, but being human I probably will.  The clean-up is a work in progress, but it's our work and we're all taking a community pride in getting it done.  We'll recover and be better for the experience.  I believe the old saying is:  Whatever doesn't kill you makes you stronger.

Have a great day, everyone.

It was not so long ago that we considered together some important ideas about what may lie ahead in the future as these energies continue to rise.  That article was called "The World Is My Desktop."  The inspiration for that article was a transmission from The Reconnections, which was called "What's Ahead for the Planet Earth?"

The foundational thought of both these articles our collective arrival into what the Guides call "The Age of Conscious Choice."  This is a time in history where humanity's multidimensional nature will be fully felt and expressed.

In the "What's Ahead" transmission,.....the Reconnections tell us that there is no one "objective" reality that makes up our planet's future.  In truth, there is a whole spreadsheet full of them!   Our planet is very much like Grand Central Station at this time.   There are many "trains" coming and going at every moment of the day.  Each of us buys a "ticket" for whatever Earth Train we wish to board.   We pay for our passage with our personal belief and  focus of awareness........which the only true currency of the Multiverse.

In the above Transmission, The Reconnections say:

"You enter (the Station), decide on your destination, purchase a ticket, and climb aboard the train that will take you where you wish to go. A specific "trip" can be manifest as "a train of thought," "an emotional side-track," or even a period of focused "training" which is designed to prepare you for more expanded existence.   As you can see, we play with words.  But be not deceived.  This "play" is serious business.  Words are also worlds!  Hidden within expressions you use everyday are portals and gateways that connect entire universes with each other.  Therefore, it behooves any traveler to begin noticing what he has been saying.  Sometimes the thought *is* the thing."

When I turn on the TV, and the newscaster says:  "The world economy is about to collapse."   My mind begins to spin.  Down one or more of those "tracks," leaving from the Station, it actually does collapse.   In a moment of time, my mind hops a freight car and follows that destination to the end of the line.   Disaster.  Oblivion!  Then, I hop aboard another "train of thought," and I find that I am back at the Station once again, choosing to buy another ticket.

The World is my desktop.   If I read a book, wherein a certain "prophet" tells me that my entire planet is going to suffer from a global cataclysm or a terrible famine, my heart may skip a beat.  The very fact that I chose to read that book tells me that those issues do have relevance in my limitation itinerary.  But do I wish to have them completely dominate me?   Then......the very next day, CNN features a news story on a region of South America that is being wracked by hunger and drought.  I hear that a meteor has crashed somewhere on the desert of Saudi Arabia.    Hmmmmmm.....interesting synchronicity, that.

What the prophet told us in that book was, indeed, true and correct.  In the Multiverse, there is a universe that honors every possibility. However, I am also the master of my fate.  I am the captain of my soul.  I get to choose.  So does everyone.  Isn't that a powerful way to live?

Instead of maximizing that "files" marked  "famine and pestilence" or the Planet Nibaru---letting them engulf the screen on my PC---this CNN news story reveals that I have decided to create two small boxes in the lower part of my Desktop, where hunger and disease are being played out.   In alternative universes (ones that are just as "real" as this one) the entire world may be wracked by hunger, or exploding in flames.   But here, in the universe of my perception, hunger and disaster prevail only as far as I require, in order to establish those ideas as part of All That Is.

RECONNECTIONS:  "A journey is not the distance between two points.  That is old thinking. Rather, it is an expansion of one's personal identification with two (or more) points, followed by a re-defining of the physical "self" from point "a" to point "b."  What causes material manifestation is the intensity of one's FOCUS upon who or what you wish to be at any moment."

These are amazing times we live in.  Through the wonders of technology, I can turn on my computer and gain an "eye" into a storm that never really touched my Daniel Self.  And yet, The Recons teach me that Curt and Bea, and all those other folks who weathered this particular storm are all parallel, alternative aspects of the same Oneself--going through our transformations in whatever way we choose.  And my, how Curt's jewel shines!

My own recent bout with inconvenience and disappointment has managed to unearth some negative energies in me that I thought I had transcended. And that's a funny kind of word, isn't it?  TRANSCEND.  It sounds like "train's end."  We purchase a ticket, and we ride that particular train to the end of the line.  Then, we get off and go someplace else.  Meanwhile, that same "route" continues to play itself out, over and over, throughout all eternity.  Once a reality is created, it remains forever in the Multiverse.

In truth, we never really "transcend" anything.  We simply gain an insight into one aspect of the Multiverse, and then go on to gain insight into something else.  If we need to go back and "audit" a particular "course of study," just to make sure we learned it, the Multiverse will make provisions for that to happen.  But then, I am speaking now (as the Guides put it) "in a linear sense."  From a more expanded way of seeing, it's all happening in one, big Multiversal NOW.

And that, my friends, is quite a point to ponder.  What's ahead for the Planet Earth?  Only time, conscious choice, and our own Universal Tour Guide can tell.  And that fellow isn't uttering a peep.  No matter how "psychic" some of us think we are, there will surely be some "surprises" up ahead.  But hey, would we really want it to be otherwise?

Copyright, 2003, by Daniel Jacob.  All Rights Reserved.  May be copied and shared for purposes of personal growth and/or expansion.  All reproduction for profit, by any means, requires the written permission of Reconnections, Inc.

My special thanks to Curt, wherever he is, for being such a fine soul, and for sharing so much of his power with all of us.