My Dear Friend,
Every Sentient Being on your planet---every person, animal, insect, tree or flower---is repaying a debt at this time.  Some appear to pay more, some pay less. Some are completely swept away in repayment of this debt.  Others barely notice the bill. You know those types of folks, yes?  The waiter puts down a check at the table and they pretend it isn't there.  It is no matter. Appearance is all it is.  Your whole 3D Template has been about appearances.  Now it will be about authentic experiences.

Everyone is repaying this debt regardless of how it looks on the outside. If something happens ANYWHERE, it is also happening EVERYWHERE, all at once.  But it doesn't always appear that way.  And so......do you go with what you know, or what you show?  Isn't that a great word....SHOW?  Is the outward just a "show" while the inward is true reality?  Do you trust your eyes on the outside or your senses on the inside?  My Dear Ones.......it doesn't have to be "either/or."

The debt you are repaying is a debt of FEELING......a repayment of CARING.  All too long have you spent your time thinking, probing, reasoning, pondering.......allowing in very little CARING to balance the scale.  Now the remainder of your bill has come due.......as a people, and as a planet.

Icebergs are melting now at your poles.  The penetrating GAZE of your SUN is trained upon the planet as She evolves.  Earth's Ozone Layer is growing as thin as your own Veils of Forgetfulness.  The heat is on!  Are you feeling it?  Or do you simply adjust the dial on your heating/cooling system so you can keep right on thinking, reasoning, and pondering?

Feeling means absorbing.......letting in what used to be outside. If what was frozen becomes a river, a sea........ you fear that your cities could become rubble.....deluged and desolate.  And, indeed......they could!  But what if Mother Earth were to suddenly become porous, like a sponge?What if fissures opened in the Earth's crust to invite water in, to drain it off?  And furthermore, what if Earth's molten core were to come in contact with its liquid shore? Changes.......many changes......important changes could and would occur.  Now let's go further than that, shall we?

What if YOU, YOURSELF begin absorbing that which once rolled so easily off your back?  As we have said, you and Mother Earth are now becoming ONE.  So truly....... it's all a metaphor, is it not?  A grand CORRESPONDENCE, with you at the center.  Icebergs, Central Suns, Rivers of clear flowing water.........EM-OCEANS crashing and flowing all around.

We sought to illustrate this in our very first transmission to you.  The ozone is thinning, your Veil of Forgetfulness is going away, and your Physical Immune System is opening wide to receive whatever is relevant, whatever comes.   Everything that cannot find it's equanimity in the realms of thought or feeling will step right up and smack you in your physical face. After all, you're the Prime Creator.  Yes, YOU!!   It isn't some President, somewhere. Or some terrorist.  If it's in your perceived universe, then it's YOU who ordered this.  So let it in, will you?  Let it all in.

When we speak of "feeling" we aren't just talking about physical sensation.  That's a gateway, of course........but it's barely a beginning.  It reminds you that you're here.  You're alive.  Thought does not always do that.  Remember when you told yourself:  "I think, therefore I am?"  Let us add to that another level, shall we?  "I WANT, therefore I become."  Even while one aspect of you simply IS, there are many other aspects in PROCESS.......so that your Is-ness can continue in its evolution.

At the heart of feeling...........anything, anywhere.....dwells this miracle of CONNECTION.  One being, many neurons. Across town, across a nation, across the planet!  There are many sets of arms, wrapped tightly around one blessed Now Moment.  To FEEL as we're discussing today, means to create a WOMB......deep within yourself.......where GLOBAL CONNECTION can occur.  Where appetite and ingenuity can mix and mingle.

Receive this feeling, not as a burden or a task to be disposed of, but as an INSIGHT, a gift.......an expansion of perspective.  But be aware......... When this viewpoint comes online, it will NOT be understood in words or phrases.  It will simply manifest as living TONES OF ENERGY.......waves of sensation and aliveness---sometimes intense and unspeakable, and other times pensive and still.

Collective Moralizing, regardless of context, arises from a covert FEELING OF HUNGER that has not fully discovered or told the truth about itself yet.  It remains bound, deep in the basement of individuated consciousness.....even while careless tongues wag and corrupt minds plot either to secretly indulge their hunger or to eradicate it utterly within a gathering NUMBNESS which now threatens to destroy you all.

At this stage in your journey, it is only through a clear belief in Universal Oneness that a person can even entertain these tones.  The situation has become critical, and the debt has expanded geometrically for so long that one person alone can't handle the velocity of it, though many have tried and been destroyed in the process.  Paradoxically, the concept of Universal Oneness clearly sets forth that there really is only ONE of us here.  One Being, whose singular sense mechanism is made up of many hearts and minds.

So the central issue now is.......Are you alone or are you ALL ONE?  Do you attempt to deal with this debt in Separation and Arrogance or within a State of Personal Reconnection?  If it is the latter, the very first element that would be required is for you to OPEN UP and FEEL...........so the scales of balance between thinking and feeling can begin to shift back to center.

By now, nearly every one of you has heard about Chakras---spinning wheels of light energy which are present at strategic points throughout your physical body.  In most cases, a Chakra opens in a clockwise motion, and closes in a counter-clockwise motion.  This is the opposite of how one might open and close a jar.

Occasionally, there may be a person who is wired backwards, or "switched".......characterized by Chakras opening and closing in exactly opposite ways from what we are describing here.  Though it is a rarity for a person to remain "switched" at all times, it does happen.

To investigate the state of your Chakras, begin passing your hand clockwise over one of them, in circular motion, allowing its magnetic charge to turn the "wheel."  The more you continue the motion, the more OPENING you will experience.  If you reverse the motion, you will begin to sense the Chakra close.  If you could visualize the nature of a Chakra, it would be very much like the shutter on a camera, exposing the internal "film" of your awareness to the wonders of life in 3D.

(Note:  For a list of Chakras in the Body, their focuses and functions, the reader is invited to review Part 2 of "The Bridge People" Commentary.) 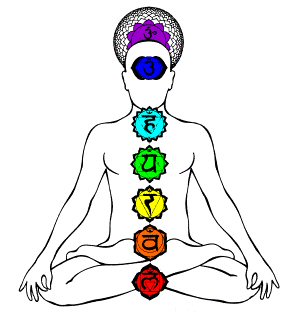 Above the "belt" line of your body is masculine.  Below the "belt" line is feminine.  You'll probably remember the guideline in prizefighting, cautioning the participants to avoid "hitting below the belt."  This rule would be the same as saying:  "Never hit a woman."  Within each of you, as a Oneself Being, there lives both a man and a woman.

As your bodies and minds change, ever so rapidly, in these coming weeks, months, and years---it becomes more crucial than ever for each person to mind the state of his/her Chakras.  Are they open or closed?  Can you remember WHY they are as they are?  What do you need to do to come back into balance?  If you find yourself THINKING incessantly, go stimulate the lower half of your body.

"When despair for the world grows in me and I wake in the night at the least sound in fear of what my life and my children's lives may be ......I go and lie down where the wood drake rests in his beauty on the water, and the great heron feeds.  I come into the peace of wild things who do not tax their lives with forethought of grief. I come into presence of still water.  And I feel above me the day-blind stars waiting with their light. For a time I rest in the grace of the world, and am free."

If you find yourself FEELING INTO THINGS MERCILESSLY, without respite, get up and go do something physical.  Dance, climb the face of a mountain, or engage your mind in healthy discussion or learning.

"The best thing for being sad........." replied Merlyn........."is to learn something.   That is the only thing that never fails.  You may grow old and trembling in your anatomies, you may lie awake at night listening to the disorder of your veins....you may see the world  around you devastated by evil lunatics, or know your honor trampled in the sewer of baser minds.  There is only one thing for it then--to learn!  Learn why the world wags and what wags it.  That is the only thing the mind can never exhaust, never alienate, never be tortured by, never fear or distrust, and dream of regretting.  Learning is the thing for you.........."

The purpose of this transmission is to help you avoid being "closed down" because of traumatic changes in body energy due to difficult life circumstance or energy flux upon the planet.  Though Chakras can and do "crash" at times (close drastically), a better solution for self-balancing would be to open corresponding Chakras wider, in order to offset "surges" that are being felt in other key areas.  In other words, let your WHOLE minister to your "holes" in spirit or in faith.

In our Ultimate Healthcare Transmissions, we told you:  "At the most basic level, the only healing that is ever needed is complete awareness of what is happening at any moment."  The best way to feel better is to become better at feeling.  And so it is.

Be mindful of your feelings. Strip away all semblance of roles or masks you have manufactured to represent who and what you are.  Learn to tell the truth......to be natural.  Don't just recite the "facts" of your life, but include the ongoing internal narratives as well.  In this way, you become strong as well as "tough."  Toughness involves armoring, with the design that no one will be able to truly "get to you," or see who you really are.  Strength involves taking off the armor, removing your facades, and allowing those close to you to have Now Moment Access to your tender parts."  (with this skill naturally comes the ability to say "Ouch!" when someone mistreats or steps on those tender parts!)

If need be, wear your masks to work or war, or whatever........but never forget the authentic YOU who is there beneath the mask.  In so doing, you will be joining thousands, millions, eventually tens of millions in expanding Earth Beings.......standing shoulder-to-shoulder to support Gaia as She passes through some Heavenly Portals, indeed.