As the energies on the planet continue to rise, it brings to mind a scene from that very first "Star Wars" movie, where Luke Skywalker and Company set out to rescue Princess Leia from the Evil Empire.  At one point, in a fit of desperation, Leia suggests they all slide down this garbage chute, so they can escape the barrage of laser shots that are coming from Imperial Storm Troopers who are hot on their trail.

The way I see it, most of the Governments of this World have managed to jump down garbage chutes of some kind of other.  Many individual have done this as well.  And right about now, it doesn't matter much WHY we did it.  What matters is:  We're treading water, wrinkling our tender noses from the awful SMELL that is all around us, and wondering what that was that just brushed past our feet down below.

Suddenly, we hear a clanking noise and a giant engine starts up.  It seems that someone has turned on GARBAGE MASHERS, and the walls are moving in!

Rising fuel prices, food riots, air pollution, global warming, disappearing jobs, outsourcing, governmental corruption, terrorism, disease......  Where the hell is C3PO when you need him?!!!  These "walls" really feel like they're closing in!  Truthfully, ANYTHING that we have previously used as a "wall" will begin closing in on us before long. 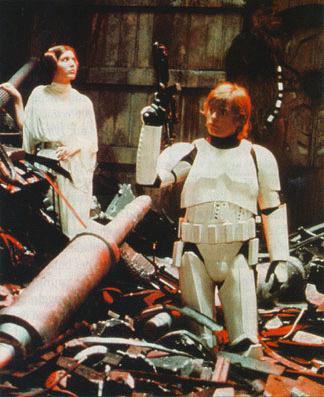 The purpose of THE BIG SQUEEZE in 3D life at this time is to FORCE PEOPLE to awaken and begin claiming and activating their creative power.  There appears to be shortages of food and supplies (notice that I said: "appears to be")......so that we will begin re-aligning our value systems according to Multiversal Awareness.  For example, the Old Paradigm motto "safety first" no longer applies when we take into account our eternal nature (invulnerability) and total sovereignty over the unfoldment of our lives. Those who value "safety" above all other things often refuse to make important "leaps of faith" when the time comes.

Last week's featured article about Demons and Spirit Guides plays right into this theme. Demons will often use fear or anger to goad us into "running for cover."  Though taking evasive action is normal and reasonable under certain circumstances, it is often those "fast retreats" which help to slide us into our garbage chutes, is it not?  Lies, betrayals, drugs, addictions, credit cards......... 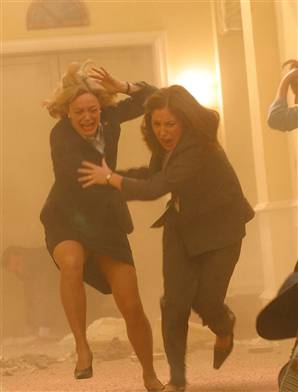 In a recent (and much needed) revelation of New Paradigm Insight, The Reconnections emphasized to me that, behind every (seeming) importunity in life---those GARBAGE MASHERS of 3D--there is an UNACKNOWLEDGED DESIRE which is trying to burst forth. And all the pain and inflammation rising up around it, like pus in a wound that has not quite come to a "head," is guiding me to ask and re-ask myself that all-important question:

"What is it that I really want?"

What's troubling you right now?  Is something threatening your "status quo?"  The "Big Three" issues in 3D Human Experience right now are usually popping up in the realms of:  health, finances, and relationships.

Ask yourself:  "What is it about my status quo that I don't really like?"  After all, the ONLY WAY that "Demons" can harass you (and your life mission) is if your subconscious desire doesn't match your conscious intent.  In other words........you SAY that working this job, being in this family, raising these kids, or practicing this discipline is VERY IMPORTANT to you.  Yet something.....seems to be leaning in, trying to snatch it away.  Sooner or later, you will have to come to grips with the fact that whatever seems to be chasing you is A PART OF YOU. 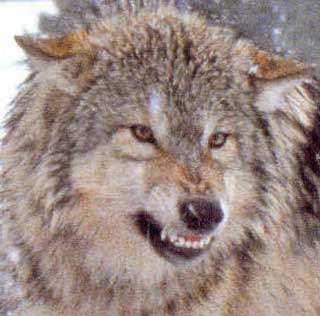 We can only exercise WILL POWER so long.........just like those metal rods Luke and Han Solo tried to use to stop the walls from closing in on the Death Star. Sooner or later, even metal tends to snap!  And then THE BIG SQUEEZE is upon us once again. Along with this current insight, the Guides have also emphasized: "When you are zeroing in on what it is you really want, try NOT to waste time and energy figuring out HOW you're going to get it."

The HOW of things is no longer the business of our Form Ego. There are more expanded aspects of us who administrate all that.  But the WHAT part of the equation.............that IS our business.  We need to reach right in and bring it all conscious.  And if the answer to our question is not readily available, we need to watch and wait for clues.

Some folks do well keeping a journal.  Others keep a pile of 3x5 cards in their pocket so they can jot down ideas as they come.  This latter idea, which came to me early in life, has recently been restated and emphasized in my reading of Robert Pirsig's "LILA"..........a fitting follow-up novel to his groundbreaking "Zen and the Art of Motorcycle Maintenance."  In this story, the main character does something similar to this (using small slips of paper)..... as a kind of spiritual discipline, to keep mind and heart clear.

So here we are.........smack dab in the middle of the BIG SQUEEZE.  The part that seems to confound us most is:  some people have it "squeezier" than others right now. Some have it easier, and some have it "squeezier."  But the "haves" and the "have nots" only appear to be separate.  They are NOT.  Each of us is a reflection of some part of the other.  We are BRIDGE PEOPLE.........spanning ourselves between realms of "abundance" and "lack," doing research for All That Is........creating common links between the gifts which flow from each of these life states.

More about this process, especially in the areas of finance, can be found in the transmission:  "The Economics of Oneness."  And there's soooo much more to say about all of this!  But first, many of us may find we simply need to BE in the midst of whatever it is that is bugging us.  BE there..........FEEL IT..........EXPERIENCE IT.  And then, at the proper time....our pain and irritation finally come to fruition........bursting forth in a release of trapped energy and insight---re-establishing us in a renewed state of joy and compassion for all beings.