There are those of us who suffer calamity, and there are those who watch and feel it from afar.  Until recently, I always thought that those in the first group had the tougher assignment.  In 3D, I suppose they do---though the rigors of keeping alive and saving property can and do tend to absorb the better portion of a person's attention.

We are now discovering there is more to life than just 3D.  Inner Planes Awareness is becoming a very real element in the lives of millions on Planet Earth.  And the statistics for this will only increase as our planet's energy continues to rise.

Sometimes referred to as "Planetary Alchemy" or "Gridwork," the act of energetically TAKING ON the shifts and changes that are now coming upon Mother Gaia and Her people is rapidly moving to the head of the line for importance in our Collective Transition from 3D to 4D and beyond. 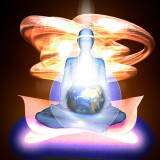 There are actually people who are now becoming infirmed or injured, being forced to SLOW DOWN and stop functioning so much in physical space---so they can take up their place on the front lines of Planetary Gridwork.  Usually, they hate this at first---because Large Scale Empaths don't always understand their gift.  Eventually, however, most of them make peace with what's happened.  As they make peace within, they BRING PEACE to millions without, simply by turning their Focus of Attention towards key areas of the Earth so balance can be attained.

Most of us have NO CONCEPT of how powerful our Focus of Awareness can be.  That is because many are still asleep to the fact that we are each CONSCIOUS CREATORS for the Universes we inhabit, the Universes we are!

The Reconnections are now speaking to us about a whole new definition for our dichotomy of terms known as "inside/outside."  The former term now stands for everything a person is willing to think of as Part of SELF, while the latter term refers for those people, objects, situations, or locales which are classified as "other."   The whole business is rather metaphorical---but powerful, nonetheless.

The Hearts of Reconnecting People are being joined to form an ARK (or Arc) of Energy which is surrounding, penetrating, and enfolding the Planet.  The more people and objects we place inside that "Multidimensional Ship" labeled "Me"...........the more equanimity and peace we can share with our world as She is being expanded and birthed.

As singer-songwriter John Mayer once put it so aptly:  "You can't be of a assistance if you're standing at a distance."   And he wasn't just speaking about physical presence, either.  Sometimes.........a merge of the heart can mean so much more than being there in body.  America almost discovered this right after September 11, 2001.  Unfortunately, we chose to let anger and power-mongering cloud our vision, so we couldn't see the outpouring of love that was coming towards us from the rest of our world.  This love is the same type of "support" that is needed now.  The Mayans use the expression "In Lak'esh"........which means "I am another yourself."   For those are adept at Inner Planes Alignment, that statement is not merely a truism.  It's a way of life.

"You've just told me some high spots in your memories. Want to hear mine? They're all connected with the sea........ I became drunk with the beauty and singing rhythm of it, and for a moment I lost myself---actually lost my life. I was set free! I dissolved in the sea, became white sails and flying spray, became beauty and rhythm, became moonlight and the ship and the high dim-starred sky! I belonged, without past or future, within peace and unity and wild joy, within something greater than my own life, and the life of Man, to Life itself! To God, if you want to put it that way....Dreaming, not keeping lookout, feeling alone, and above, and apart, watching the dawn creep like a painted dream over the sky and sea which slept together..........."

Flooding in the Midwest (click here, turn on speakers)