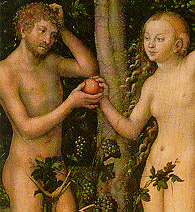 A New "Take" on Adam and Eve

If you want another version of Adam and Eve that will bring a smile to your lips, check out Mark Twains version of the Genesis Story:

Whenever your children are out of control, you can take comfort from the thought that even God's omnipotence did not extend to His own children. After creating heaven and earth, God created Adam and Eve. And the first thing he said was "DON'T!"

"Because I am your Father and I said so!" God replied, wondering why He hadn't stopped creation after making the elephants. A few minutes later, God saw His children having an apple break and He was ticked! "Didn't I tell you not to eat the fruit?" God asked.

"Then why did you?" said the Father.

"She started it!" Adam said.

Having had it with the two of them, God's punishment was that Adam and Eve should have children of their own. Thus the pattern was set and it has never changed.

BUT THERE IS REASSURANCE IN THE STORY!

If God had trouble raising children, what makes you think it would be a piece of cake for you?

1. You spend the first two years of their life teaching them to walk and talk. Then you spend the next sixteen years telling them to sit down and be quiet.

2. Grandchildren are God's reward for not killing your own children.

3. Mothers of teens now know why some animals eat their young!

4. Children seldom misquote you. In fact, they usually repeat word for word what you shouldn't have said.

5. The main purpose of holding children's parties is to remind yourself that there are children more awful than your own.

6. We child proofed our homes, but they are still getting in.

ADVICE FOR THE DAY! Be nice to your kids....they will choose your nursing home.

AND FINALLY: IF YOU HAVE A LOT OF TENSION AND YOU GET A HEADACHE, DO WHAT IT SAYS ON THE ASPIRIN BOTTLE:

"KEEP AWAY FROM CHILDREN."